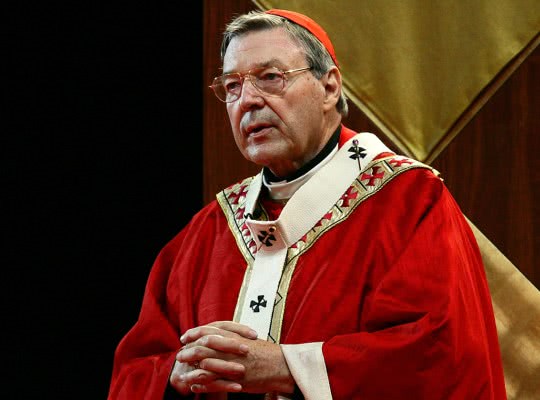 The most extraordinary thing about today’s allegations of murders during satanic rituals involving a Melbourne priest is not that they’ve been made, but that the Catholic Church admitted in writing that it accepted they were substantially true.

Indeed “extraordinary” was the word used by the Melbourne Archdiocese’s experienced sexual abuse investigator Peter O’Callaghan QC to describe the allegations when they were put to him in 2000.

Documents on the case obtained by Gotcha show that Mr O’Callaghan, who has overseen claims for compensation by more than 200 victims of sexual abuse by Melbourne Catholic priests, accepted that the man making the allegations was telling the truth. (You can read today’s news story on the revelations here).

“I see no reason why I shouldn’t accept what you say,” Mr Callaghan told the victim during a formal interview on October 9, 2000. “Amazing as it is, I accept it.”

And two days later in a letter to the victim’s lawyer offering compensation, Mr O’Callaghan said: “I confirm that the events which (the victim) describes are extraordinary, but I have no reason or justification for doubting his credibility.”

Mr O’Callaghan also acknowledged that what the victim told the Archdiocese was similar to what he had told his psychiatrist and that the psychiatrist “accepts what (he) has described was the fact”.

The statement provided to the Archdiocese by the victim, who wants to remain anonymous, makes chilling reading.

He details how the Catholic priest, who has since died, first began abusing him at the age of 11 in 1961 when he was serving as an altar boy at the Sacred Heart Church in the bayside suburb of Sandringham and attending a Catholic school, where the priest was chaplain. The priest got the victim alone in a room on the pretext of giving his a sex education lesson and sexually abused him.

Later the priest would sexually abuse the boy in his car and at the Sacred Heart Church’s presbytery, where the victim was lured on the promise of playing with toy soldiers.

But it’s the accounts of satanic rituals and the victim’s eyewitness reports of murders that are harrowing.

In the statement he details at least three murders – a young girl, a youth and a young child. He says the victims were mostly drugged and appeared to be in a daze before having their throats cut or being hacked with an axe.

He says he was forced to take part in the rituals and was sexually abused during them by the priest and others involved in the ceremonies.

While claims of satanic rituals and ritualised sexual abuse by victims are nothing new, what makes these allegations different is the Melbourne Archdiocese’s acceptance of the claims as being true. To our knowledge, it is the first time the Catholic Church in Melbourne has done that in writing.

Some of the rituals, which occurred over a three year period, took place in an old house owned by the Catholic Church in Sandringham. The house was later demolished and a new Sacred Heart Church built on the site.

“It would have been impossible to sprinkle enough Holy Water on that site to purify it before building a new church on it,” the victim told Gotcha.

Other rituals took place at other locations around Melbourne. The victim would be driven to and from the locations by the priest.

The victim said during one of the final sexual assaults by the priest he was threatened with a carving and told he would be killed if he ever talked to anyone about what he had seen or what had been done to him.

The victim first contacted Victoria Police in 1998 and was told details would be passed to the homicide squad. He says he heard nothing more.

In his interview with the victim, Mr O’Callaghan confirmed that details contained in the statement “is a series of criminal offences, but it doesn’t appear that anyone has ever been apprehended for those offences, or will be”.

Mr O’Callaghan independently contacted Victoria Police in 1999 over the allegations, but was told that homicide and missing persons records had been checked and there was no ongoing investigation.

The victim finally escaped the priest’s clutches at the age of 14, when he was old enough to start avoiding him.

In accepting the compensation payout, the victim had to agree not to take further legal action against the Archdiocese.

In a letter to the victim dated January 5, 2001, the then head of the Melbourne Archdiocese, Cardinal George Pell, apologised for the “wrong and hurt” he suffered at the hands of the priest.

The victim’s decision to speak out follows the conviction in the United States earlier this month of Catholic priest Gerald Robinson for the ritualistic murder of a nun.
He said he believed there were other victims of ritualised abuse in Australia who were too afraid or embarrassed to speak out.

Robinson was charged with the murder of the nun 26 years ago after a female victim of child sexual abuse went to authorities with claims that the priest had been involved in satanic rituals.

Here are extracts from the documents on the Melbourne case:

Extract from letter to victims lawyers, October 11, 2000:
“I refer to our conference with Mr (name of victim) and yourself on 9 October 2000 and confirm that I am satisfied that Mr (victim) was a victim of sexual abuse…substantially in the circumstances described by mr (victim) in the statement he made to you in November 1999, and which statement he verified at the conference today.
I confirm that the events which Mr (victim) describes are extraordinary, but I have no reason of justification for doubting his credibility. In that context I note that an experienced psychiatrist…has accepted what Mr (victim) has described was the fact.
I accordingly enclose herewith an application for compensation which I invite you to have your client complete and return to me.
Yours sincerely
Peter O’Callaghan
Independent Commissioner

Extract from transcript of conference between the victim, his lawyer and Independent Commissioner Peter O’Callaghan, October 9, 2000:
O’Callaghan: …I have read a statement that you made…could you just look at that please. I don’t want you necessarily to read through it, but do you remember making that statement?
Victim: Yes, this was written up from material and it’s correct.
O’Callaghan: Yes, so the contents of that statement are true and correct.
Victim: Yes.
O’Callaghan: Alright, well now look the…I appreciate what (victim’s lawyer) was saying that the matters are harrowing in your recollection, but what you’ve told Dr (name of psychiatrist), is that also true and correct?
Victim: Yes.
O’Callaghan: And the thing I’ve got to frankly say is yours is an amazing story. But you tell me it’s true.
Victim: Mmm.
O’Callaghan: You saw Detective (inaudible) at one stage, didn’t you?
Victim: I spoke to him twice on the telephone.
O’Callaghan: Yes. And he, when was the last time you spoke to him?
Victim: When?
O’Callaghan: Yes. Approximately.
Victim: Maybe two or three years ago, I imagine.
O’Callaghan: Right, alright well, what you relate is a series of criminal offences, but it doesn’t appear that anyone has been apprehended for those offences, or will be.
Victim: Mmm.
O’Callaghan: Alright, well look the position is that I am an Independent Commissioner and if I am satisfied that a person has been the victim of sexual abuse by a priest of the Archdiocese, then I can refer that person to Care Link, which you know about. I can also refer that person to the compensation panel and make an application for compensation, which I take it that you’re desirous of doing, are you?
Victim: Yes.
O’Callaghan: Well, what that entitles you to is an award of compensation up to a limit of $50,000. What I will do is to indicate that I am satisfied that you were the victim of sexual abuse. I see no reason why I shouldn’t accept what you say and it’s certainly supported by what you told Dr (name of psychiatrist) and indeed what you’ve told a number of people over many years. Amazing as it is, I accept it. And if on that basis, what I will do is I’ll send out…an application for compensation and you can fill that in…”

Melbourne Archdiocese response to NEWS.com.au:
“The Independent Commissioner advises that after he was contacted by (the victim’s solicitor) in 1999, he advised (the solicitor) as follows:
‘Could you advise me whether these matters have been reported to the police and if so what action emanated therefrom. If they have not been reported to the police, then it would seem essential that they are…
‘I accept that you have forwarded this letter to me in my role as Independent Commissioner and on the premise (at least implied) that I will treat this matter in confidence. I confirm that this is certainly the position at this point in time, but I would certainly be urging your client to report the matter to the police…or alternatively I would ask his permission to myself report the matter to police.’
(The victim’s solicitor) subsequently advised that the matter had been reported to the police and authorised the Commissioner to contact the police.
The Independent Commissioner then contacted the police, who advised (the victim) had in 1998 advised the police that he was the victim of sexual assault and was a witness to murder. The police advised that enquiries had been made with the homicide squad and their missing persons records and intelligence was unable to confirm the allegations, and that there was no current investigation into the matter.
Accordingly the Independent Commissioner proceeded to deal with (the victim’s) application for compensation.”