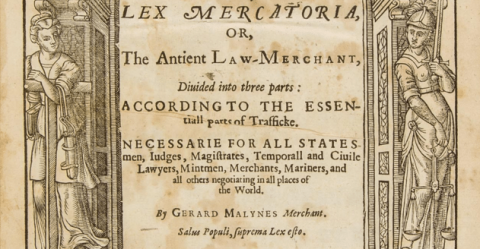 The law merchant is the Roman Law of the Sea (Lex Mercatoria), which can trace it’s origins back to ancient Babylon.

Let’s take a look at some verses in Revelation chapter 17 and 18;

17 And there came one of the seven angels which had the seven vials, and talked with me, saying unto me, Come hither; I will shew unto thee the judgement of the great whore that sitteth upon many waters:

The use of the word waters is a reference to commerce. The word Mer-Chant is equivalent to the chant of the sea. Mer = Sea and the word Chant.

Commerce is the right to trade as a merchant.

3 So he carried me away in the spirit into the wilderness: and I saw a woman sit upon a scarlet coloured beast, full of names of blasphemy, having seven heads and ten horns.

4 And the woman was arrayed in purple and scarlet colour, and decked with gold and precious stones and pearls, having a golden cup in her hand full of abominations and filthiness of her fornication:

5 And upon her forehead was a name written, Mystery,Babylon The Great, The Mother Of Harlots And Abominations Of The Earth.

Notice that the name of the Whore is in all CAPITAL letters? All capital letters is in fact Dog Latin; Blacks Law Dictionary 6th edition Dog-Latin. The Latin of illiterate persons. Latin words put together on the English grammatical system

This use of Dog Latin is one of the tricks used by the masonic power players to diminish our birthright. This is called Capitis Diminutio which is to diminish one’s capacity.

15 And he saith unto me, The waters which thou sawest, where the whore sitteth, are peoples, and multitudes, and nations, and tongues.

16 And the ten horns which thou sawest upon the beast,these shall hate the whore, and shall make her desolate and naked, and shall eat her flesh, and burn her with fire.

17 For God hath put in their hearts to fulfil his will, and to agree, and give their kingdom unto the beast, until the words of God shall be fulfilled.

18 And the woman which thou sawest is that great city, which reigneth over the kings of the earth.

Verse 15 we are told the waters are peoples and nations.

What if I told you that AUSTRALIA is actually a massive geographical area of water that encompasses the landmass we believe is the country called Australia?

Why do you think we now need to receive citizenship and become AUSTRALIAN citizens?

Citizens belong to Rome and citizenship means you have become a citizen of a ship called AUSTRALIA (ship names are always written in capital letters).

Also, the great city that reigneth over the kings of the earth is the Vatican.

All the royal crowns are owned and leased out by the Vatican.

Revelation 18:1 And after these things I saw another angel come down from heaven, having great power; and the earth was lightened with his glory.

2 And he cried mightily with a strong voice, saying,Babylon the great is fallen, is fallen, and is become the habitation of devils,and the hold of every foul spirit, and a cage of every unclean and hateful bird.

3 For all nations have drunk of the wine of the wrath of her fornication, and the kings of the earth have committed fornication with her, and the merchants of the earth are waxed rich through the abundance of her delicacies.

The merchants of the earth are the ones engaged in commerce.

The Merchants law is the law of the sea.

15 The merchants of these things, which were made rich by her, shall stand afar off for the fear of her torment, weeping and wailing,

16 And saying, Alas, alas that great city, that was clothed in fine linen, and purple, and scarlet, and decked with gold, and precious stones, and pearls!

17 For in one hour so great riches is come to nought. And every shipmaster, and all the company in ships, and sailors, and as many as trade by sea, stood afar off,

18 And cried when they saw the smoke of her burning,saying, What city is like unto this great city!

19 And they cast dust on their heads, and cried,weeping and wailing, saying, Alas, alas that great city, wherein were made rich all that had ships in the sea by reason of her costliness! for in one hour is she made desolate.

20 Rejoice over her, thou heaven, and ye holy apostles and prophets; for God hath avenged you on her.

21 And a mighty angel took up a stone like a great millstone, and cast it into the sea, saying, thus with violence shall that great city Babylon be thrown down, and shall be found no more at all.

23 And the light of a candle shall shine no more a tall in thee; and the voice of the bridegroom and of the bride shall be heard no more at all in thee: forthy merchants were the great men of the earth; for by thy sorceries were all nations deceived.

24 And in her was found the blood of prophets, and of saints, and of all that were slain upon the earth.

Lex mercatoria /leks m�rk;)t6riy;)/. The law-merchant;commercial law. That system of laws which is adopted by all commercial nations,and constitutes a part of the law of the land. It is part of the common law.

Why do you think we now wave a blue flag when the original Aussie flag was the Red Ensign flag?