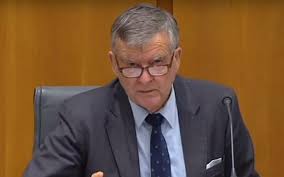 Liberal senator Bill Heffernan has used parliamentary privilege to accuse an unnamed former prime minister of being an alleged paedophile, while also pointing the finger at the judiciary.  Senator Heffernan has been campaigning for the Royal Commission into Institutional Responses to Child Sexual Abuse to expand its investigation to include the court system.  He told Senate estimates today that he had given the commission “very disturbing” police documents that named at least 28 alleged paedophiles, some of whom are prominent Australians.  But he said the commission had told him it could not investigate the cases because they were outside its terms of reference.

“We have in Australia, sadly, a compromise at the highest of levels. There is a former prime minister on this list and it is a police document, ” he told senators.  “It’s not so much the secret that’s the problem, it’s when a group of people, such as the 28 people on this page, keep each other’s secrets that the institution is compromised.”

Senator Heffernan did not expand on the allegations or provide any further details, instead focusing on what he believed were the failings of the “the institution of the law”.  “The treatment in the federal jurisdiction of children by some people in the Family Law Court is disgusting and a disgrace,” he said.

Attorney-General George Brandis suggested the royal commission could look into the “grave matters” raised by the senator but said it was ultimately up to the commissioner to decide.  “The royal commission has a process for dealing with complaints and other information brought to its attention and placed into its hands by citizens,” he said.  “It is for the royal commission to judge whether, by reference to its terms of reference, that information is something that it should or indeed is capable of inquiring further into.”