Whats Gary Dowsett got to do with it? 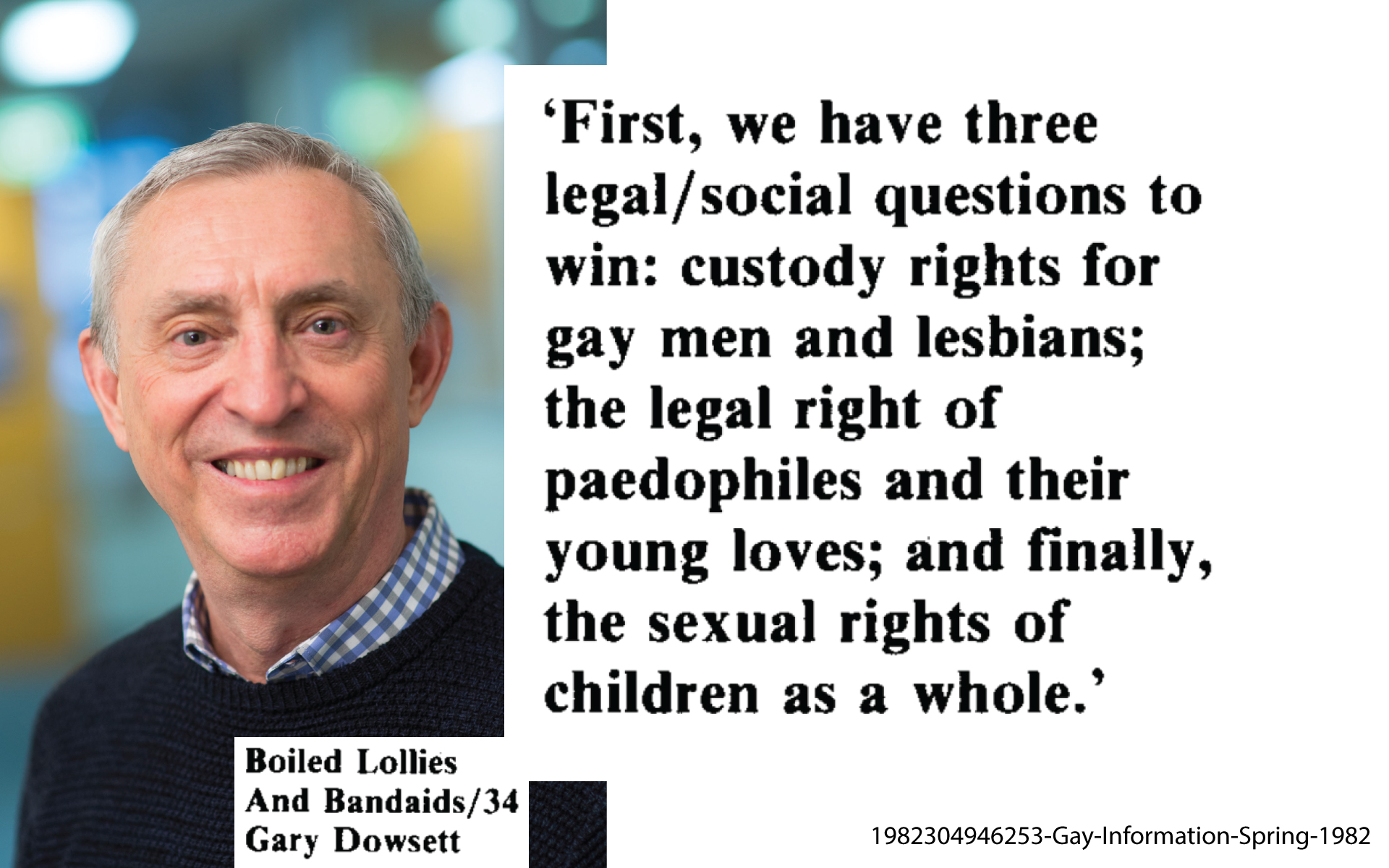 Safe Schools Coalition Victoria was established by the Victorian Government in 2010 in response to research into the experiences of same sex attracted and gender diverse young people in Australian schools or thats at least what they told us.

The following names are most relevant as we explore the origins of the program, the research behind it and the authors of Victorian Sexuality Education curriculum.

This work was supported by a Commonwealth AIDS Research Grant.

This report is about young people who are attracted to their own sex. The need for accurate baseline figures about young people of non-heterosexual orientation has developed as part of a general concern about the spread of the HIV virus into the adolescent population and a specific concern around these young people’s emotional well-being.

Seven hundred and fifty young people aged between 14 and 21 participated in the study (average age of 18).

Participants were asked about sexual attraction, sexual identity and how they felt about their sexuality.

Labelling their sexual identity, most respondents chose the categories 'gay/lesbian (45%) or 'bisexual' (35%) with a sizeable minority selecting 'heterosexual' (9%).

Data was gathered for the project by means of a short questionnaire designed to generate a mixture of forced-choice and open-ended responses from young people, and was therefore qualitative and quantitative.

More young people (70%) were abused at school than anywhere else the report said. Let's put that in perspective, 70% out of 750 self selected participants.

At school, there was little information about gay or lesbian safe sex and the situation was even worse in the context of the family.

The sample generated is not random, and no claim is made that results can be generalised to the broader population of young people.

Every attempt was made to ensure that young people in all states and territories of Australia were sampled in proportion to the general population, with attention paid to attracting equal numbers of young men and women; and sizeable numbers of young people from both rural and urban settings.

Young people were recruited initially via national youth magazines and the Internet.

Recruitment commenced in January 1998, with the publication of the survey on the website; and continued through to the end of May 1998, at which time the web page was closed, the toll-free number was disconnected, and mail back of survey booklets ceased. The target group nominated for this project was young men and women between the ages of 14 and 21. Sounds like school aged youth to me...

Coupons appeared in the March 1998 issues of Dolly, Juice and Smash Hits magazines, under the caption 'Who turns you on': to ensure the questionnaire website was publicised to as wide an audience of young people as possible.

Generalist and queer specific youth sites were targeted. ...search engine Yahoo placed a link to the survey site in their 'Picks of the Week', ... a great deal of exposure, as did a project description ...youth radio station Triple J.

Surveys were also placed as inserts in the following queer community publications:Brother Sister magazine in Brisbane; the Sydney Star Observer and GT magazine in Adelaide;

Only 266 people Australia-wide, 175 of whom were young women, sent in or phoned to have a survey posted out. Only 160 completed surveys arrived in response to a magazine coupon. Eleven questionnaires were returned marked 'Not known at this address'.

Several hundred invalid surveys were received, largely due to the anonymous nature of the recruitment process. With the advent of the link from the 'Yahoo' search engine, the overseas audience for the survey greatly expanded. Large numbers of otherwise valid questionnaires from young people outside of Australia were received, which unfortunately had to be discarded. Some of the reply-paid questionnaires were sealed and posted by ineligible members of the public who came across them in the West Australian free press and the gay press in Sydney, Brisbane and Adelaide. A sizeable number of young people who claimed no same-sex experience or attractions and identified as heterosexual submitted surveys electronically.

Every attempt was made to recruit numbers of participants from each state and territory, in proportion with numbers of young people in the general population of Australia.

Young people were asked about sexual attractions and about how they labelled their sexuality. The distinction between these two aspects of sexuality is particularly important given that research has confirmed a human capacity for varying degrees of same-sex attractions and sexual activity, which may or may not result in self-identity as a homosexual. (Kinsey et al., 1948, 1953; Savin-Williams, 1990).

In the absence of wide-spread public affirmation for homosexuality, confusion rather than a sense that identities and attractions are 'fluid' prevails for many, particularly the younger participants in this study, and was a far more common reaction to having attractions for or experiences with both sexes.

This research has clear implications for all practitioners working with SSAY, particularly in the context of schooling. Programs need to be inclusive of all sexualities in order to ensure young people are not forced to seek information from less reliable sources.

So what is the point parent WARRIORS are trying to make with this 91 page research document? The very first survey of Writing Themselves In?????

How is such a sample amount of Australian Youth significant for the entire population of the youth in the country?

"Sexuality is a structuring force in the lives of all young people, and it is suggested that a framework which takes a whole school approach to supporting sexual diversity in all aspects of school life is needed. Given the high levels of sexuality based harassment identified in this project, consideration needs to be given to developing policy which explicitly addresses homophobia along with sexism, racism and other forms of violence. Equal Opportunity and Human Rights legislation provides a framework for policy development in this area. Young people who have suffered discrim nation on the grounds of their sexuality should also be made aware of their legal rights under this legislation...”